Posted at 21:27h in Archived or On Hold Projects, Land Use & Zoning by Judi Short
0 Likes 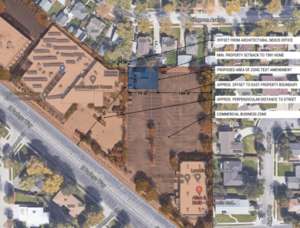 UPDATE:  Architectural Nexus has withdrawn this proposal for now.

UPDATE:  Here is the SHCC letter with comments to the Planning Commission.

UPDATE:  The city is holding a virtual Open House, with comments ending May 10, 2021.  Here is a link to all the plans:  https://www.slc.gov/planning/2021/03/30/architectural-nexus-cb-zoning-text-amendment/

This was on the January 11 LUZ committee meeting.  Now Salt Lake City has received a request from Architectural Nexus proposing a zoning text amendment to the CB – Community Business zoning district that would allow a “School: Professional and Vocational (Outdoor)” and associated activities to be allowed on a defined portion of their property at 2545 E. Parleys Way. The property is zoned CB – Community Business zoning district which only allows vocational uses within an enclosed building. This is the location of the project.

The applicant proposes to use a designated portion of their site for the building of Accessory Dwelling Units or tiny homes on an ongoing basis, with the structures donated to the community through a charitable giving program. This proposal would designate an area approximately 3,750 square feet in size at the back of an existing parking lot for this use to occur. To that end, the applicant is proposing an amendment to the CB zoning district to establish a designated “Build Area” on their site where a “School: Professional and Vocational (Outdoor)” is allowed. This amendment would not apply to other properties in the CB zoning district or beyond the designated area on this property.

This is essentially what the petitioner explained to us January 11 at the LUZ meeting, we have no received the formal notice from the city.  We will not have it on a future committee meeting, unless there is a big demand to do so.  There were only a few concerns expressed by the neighbors, and hopefully those have been worked out.  The letter from SHCC to the Planning Commission is not due until May, so there is still time to read the proposal and provide a comment on the form below.